Barrett-Jackson: A Pink Car for the Pink Ribbon 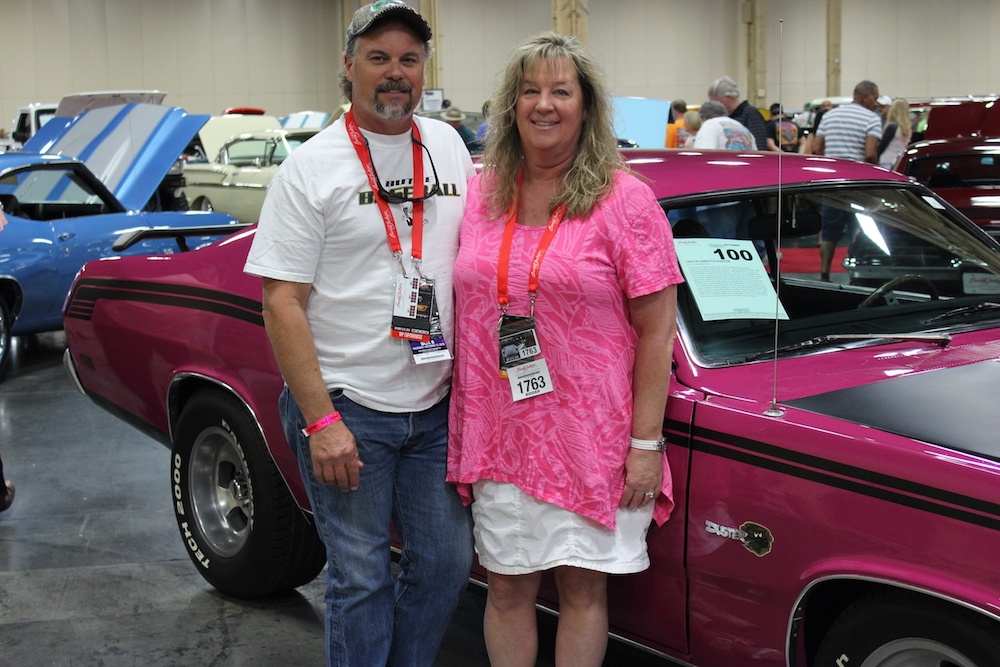 Last week, I jumped on a call with one of our Barrett-Jackson clients, Lisa, and I must say it was one of the most rewarding conversations I have ever had.

Lisa was diagnosed with stage one breast cancer 12 years ago at the age of 37. She decided to go ahead and have a double mastectomy, but thankfully was blessed to not have to do radiation or chemotherapy.

Two years later, however, the doctors discovered she had lymphoma. What’s interesting about this diagnosis is that the doctors likely would never have found it if she had not had the mastectomy two years prior. Talk about an interesting sequence of events. Lisa underwent radiation and chemotherapy, and we can happily say she has had an amazing remission.

This incredible story brings Lisa to where she is today.

Lisa has always been a car girl – more of a tomboy than a girly girl as she says – but her favorite color has always been pink. Her grandfather got her interested in Mustangs and she would always go to car shows as a young girl. Cars have been and still are a big part of her life.

I guess you could say Lisa and her husband love cars. They actually built a “barn” to house their collectibles. Now, as Lisa mentioned, this is not a barn for horses. They feed their prized possessions gas not hay.  We definitely got a chuckle out of that one.

Fast forward to the Las Vegas auction that fall and before you know it Lisa has a brand new car on her hands.

Lisa and her niece packed their bags and headed to the 2015 Barrett-Jackson Las Vegas auction. Now, keep in mind she is a Ford girl, but her husband is very much a Mopar kind of guy. Well, before they knew it, a PINK car came across the block, and what do you know, it was a Mopar. She initially thought it was a stick so she didn’t preview it. She quickly learned you should always preview cars. 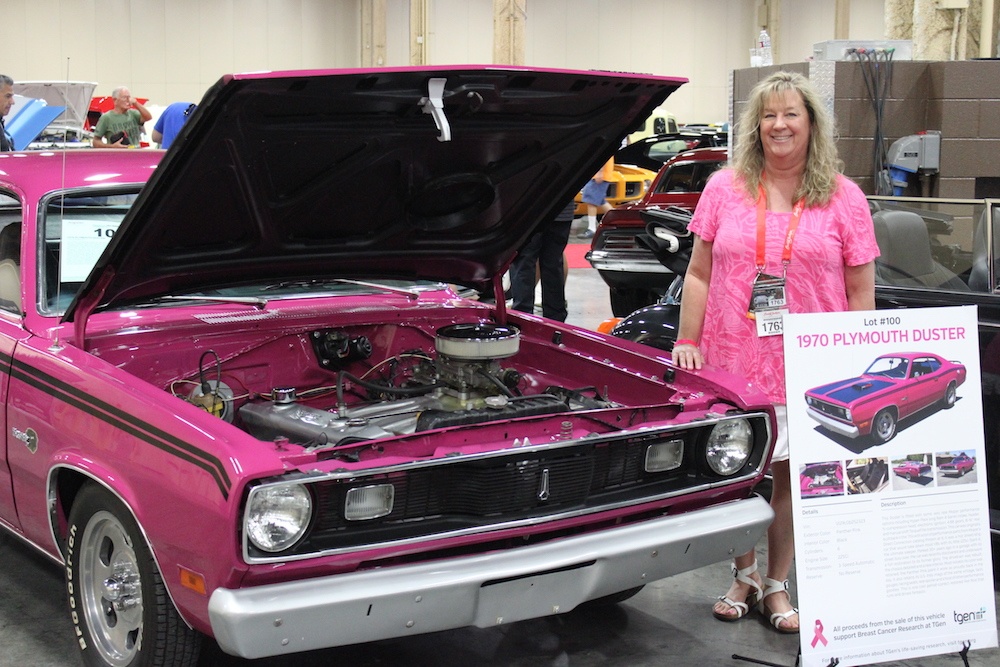 As you could guess, Lisa ended up with this beauty of a car – a 1970 Plymouth Duster, to be exact. It also turned out the car was built for drag racing. What a plot twist! Her first reaction was, “What did we just buy?” and then heartburn set in for about 12 hours. How in the world was she going to tell her husband what she just bought? Thankfully, he took the news fairly well.

Naturally, Lisa took a ride in the car, but after having her hair blow all sorts of directions, she realized she needed a new plan for what to do with the car. Turns out, everything came together at the following Scottsdale auction.

Lisa ended up meeting a man from TGen and decided to turn her car into a charity car for breast cancer. How perfect! Months later, the pink car was auctioned off at the 2016 Las Vegas auction and Lisa gave the proceeds to breast cancer research.

After the auction, Lisa was surrounded with people coming up to her to tell her how amazing it was to auction off her car for charity. We couldn’t agree more.

But here’s the thing about Lisa. She is not the type of person who likes to be in the limelight. She likes to do things under the radar. This is one reason we were so honored to be able to talk to her and share her story. Lisa has been on quite the journey since her diagnosis, and I know we all feel inspired by her incredible generosity and positive attitude through it all.

Lisa and I wrapped up our conversation with a quite hilarious, yet rewarding story. Following the auctioning of her car, she received a phone call from a representative for the North American VW. To her surprise, she had won the limited edition 2017 pink VW Beetle! Can you believe it? She had just auctioned off her pink car and then she ended up winning one. Obviously, she was meant to have a pink car. We also think it’s a sign she is meant to be involved in breast cancer research and charities. 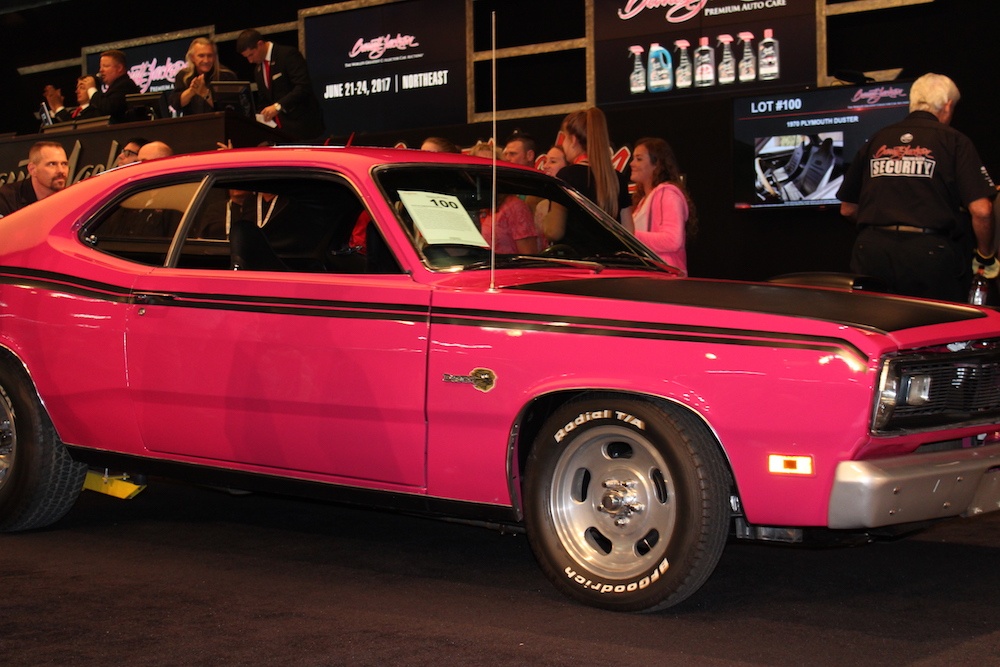 Want to see the VW she won? Search for #PinkBeetle to get a glimpse.

In case you can’t tell, I thoroughly enjoyed every second I spent talking to Lisa. I loved hearing about the fabulous time she has had at the Barrett-Jackson auctions, especially considering she has attended as a VIP with us. But most importantly, I loved that she was so willing to share her story so that we could share in the excitement with her. It was truly an honor and I am so glad that I am now able to share this part of her life with you.

So thank you, Lisa, for your immense generosity, your kind spirit and your joyful attitude. We love getting to meet people like you.

Have you attended an event with us and have a story to tell? We would love to hear about it! Email us at marketing@quintevents.com  to share your experience.